Launched in August, this is an interesting story of women who broke barriers, besides showing how the British newsrooms used to be not so long ago.

“The Fleet Street Girls is the inspiring and evocative story of the female journalists who broke down barriers in the 1970s and 1980s as women moved up the ranks in Fleet Street for the first time.

When Julie Welch called in her first ever football report at the Observer, an entire room of men fell silent. Heart in her mouth, Julie waited for the voice on the other end of the line to declare it passable. She’d done it. She was the first ever female football reporter.

In The Fleet Street Girls, Julie looks back at the steps that led to that moment, from the National Union of Journalists nearly calling a strike when she dared to write an article as a mere secretary (despite allowing men who weren’t journalists to write for the same pages), and many other battles in between.

Julie also shines a light on the other trail-blazing women who were climbing the ladder against all odds, from Lynn Barber (of An Education fame) to Wendy Holden, a war correspondent for the Daily Telegraph, and many more, as well as some of the secretaries whom the men overlooked but who actually knew everything. Pioneers one and all.

The Fleet Street Girls is a fascinating story of the hopes and despairs, triumphs and tribulations of a group of women in the glitzy heyday of journalism, where they could be interviewing Elton John one moment and ducking flying bullets or fighting off the sex pests the next. At a time when Fleet Street was the biggest, cosiest all-male club you can imagine, and the interests of half the human race were consigned to ‘The Women’s Page’ in the paper, we follow Julie and her contemporaries through dramas, excitement and sheer fun in their battle to make sure women’s voices were heard”.

A sample of the audiobook can be heard here.

The literary magazine The Bookseller gave four stars to the book  (based on The Spectator’s, Literary Reviews’, Daily Telegraph’s and The Times’ reviews). 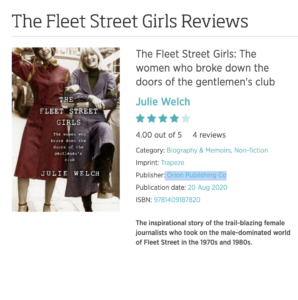 “Every woman who’s sought a career in journalism owes a debt to pioneers like Julie Welch. She evokes the golden age of print journalism in the the 60s and 70s, but the women journalists’ struggle for acceptance – let alone equality – are a salutary reminder of how things used to be. Their stories are as relevant now as they were then – and a generation of female writers will be very grateful for the battles Julie and her colleagues fought before them”- Victoria Derbyshire, BBC

“This book made me almost weep with nostalgia” -Lynn Barber, THE SPECTATOR

“In 1973, Julie Welch became the first female newspaper sports reporter on Fleet Street. It was an amazing achievement and her account of how she managed it reads like a Jilly Cooper novel … Interspersed with her recollections are those of other ‘Fleet Street Girls’, the women who joined newspapers in the 1960s and 1970s, mainly to boost the features side. Their memories make interesting reading … Many of them clearly feel nostalgia for this colourful, freewheeling era, which was hardworking, hard-drinking and full of esprit de press corps. Wandering hands notwithstanding, it sounds like good fun … Her story is original, dramatic and brave” –  Wendy Holden, LITERARY REVIEW

“Eye-opening … Welch’s book is imbued with nostalgia for a time in her life that was, while difficult, also fun. The Fleet Street Girls is as much an obituary for the “glory days of print”as it is a story of pioneering women … Welch writes with style, and her journey to acceptance in a man’s world makes for fascinating reading” – Lucy Knight, THE SUNDAY TIMES

“Fleet Street Girls recounts the stories of the trailblazing women journalists of the 1970s and 1980s, whose fight to be taken seriously by the then all-male Fleet Street club both thrilled and nearly killed them … eye-opening and highly enjoyable … the stories are wittily told, if sometimes mouth-claspingly horrifying … I found this story of women kicking dusty, idiotic old prejudices to one side (while getting the better of the tweedy old fools that perpetuated them) as cheering as it was galvanising” – Lucy Davies, DAILY TELEGRAPH

“The Fleet Street Girls is both a witty love letter to a vanished era when typewriters clacked long into the night and the filing of copy was punctuated by reviving trips to El Vino’s wine bar, and an honest picture of an era when women writers struggled to be taken seriously” – Sarah Hughes,  THE OBSERVER

“Entertaining … Fleet Street Girls is full of gorgeous details about the newsroom paraphernalia of old. The overflowing ashtrays and huge typewriters on which copy was bashed out in carbon triplicate before being stuffed into tubes and sent to the machine room via overhead wires. The vicious metal spike on which unwanted copy was “stabbed to death”= THE HERALD, Glasgow