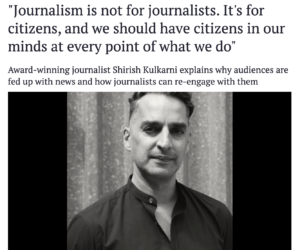 Investigative journalist and researcher Shrish Kulkarni may not have read the behavioural study World Without News commissioned by Newsworks that deprived regular readers from consuming news brands in order to understand the role that journalism plays in people’s lives. But at a talk held by the Reuters Institute for the Study of Journalism / University of Oxford on October 30, he expressed ideas aligned with some of its findings.

According to a summary of his speech prepared by The Reuters Institute, Shirish encouraged journalists to see their work as a service to their communities and to think much more deeply into the meaning of what they do.

“Journalism is not for journalists but for citizens,” he said. “We have to have citizens in our minds at every point of what we do.”

He said that news organisations should reach out to younger audiences and people of colour, be much more transparent about their editorial processes, and acknowledge more openly the things they don’t know. And that why a diverse newsroom is much better equipped to cover the news:

“There is racism in our newsrooms and those racist viewpoints have infected everything about our cause in society. Our discourse in journalism and politics often characterises immigrants as opportunistic and undeserving. Imagine how that kind of newsroom conversations make me and others like me feel. If people of colour were driving editorial decisions in newsrooms, all our discussions about immigration, inequality, education and crime would be entirely different. We need to address that with urgency.”

“Journalism must help us to understand the world, to locate ourselves in relation to the environment in which we live and to enable us to interact with it. It must help us to form visions aligned with our personal and community needs and interests ”.

The way he defines orientation is a combination of two of the objectives identified in the study conducted  by Newsworks: Orientate and Calibrate.

This view is in line with another study by the Reuters Institute, which demonstrated that service journalism contributes to the good of society and financial sustainability, especially of the regional media, based on the experiences  of local newspapers from four European countries.

Worth watching the talk, in which Kulkarni also addresses how the classic way of storytelling (the lead and inverted pyramid) should be reviewed. 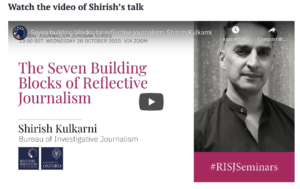 The Seven takeaways from Shirish’s talk highlighted by the Reuters Institute are:

News should help their readers understand the world. Shirish encouraged journalists to think deeply about what they do. Does their work reinforce prevailing attitudes and structures or does it allow audiences to have a more comprehensive understanding of the issue at hand? He offered as an example the coverage of individual crimes: “Does it make things better or does it drive a discourse that makes it impossible to have evidence-based discussions about rehabilitation versus punishment in our society?”

Citizens want context, not just breaking news. “Audiences are crying out for context,” Shirish said. And yet news outlets often prioritise breaking news to the detriment of context and understanding. “News organisations are so focused on the habit of constantly updating the top line that the underlying point quickly becomes really difficult to unpick as a viewer if you are not watching the news every hour or even every day,” he said. Our processes and priorities often makes us ignore structural processes like global warming. “There’s not a big single day event to put in the diary when it comes to climate change,” Shirish said. “The earth doesn’t put out a press release every month, and the constant question from editors is what’s the peg for the story, why we should be doing this now. For some bizarre reason, ‘we are all going to die in a ball of fire’ doesn’t seem to be a good enough answer enough of the time.”

Journalism should provide a space for citizens to exercise agency. “News isn’t just happening to us as passive victims of the news. We are also citizens of our communities and have our own power. We need to offer in our coverage a way for people to feel like they are involved in the world and can make a difference,” Shirish said, echoing some of the principles of solutions journalism. He suggested learning from game designers and theatre professionals who drive engagement by tapping into audiences’ curiosity.

Tone should be accessible and not defined by past habits. Shirish described workshops where a group of young people of colour watched a BBC News bulletin together and were quickly turned off by the content and the tone. “We need to find a different way of talking with people,” he said.

The news media should listen to different perspectives. Audiences can’t be expected to trust news organisations who don’t invest in understanding them, Shirish said. He gave an example from the UK: “Less than half of our national broadcasters have a correspondent based in Wales. Even fewer national newspapers have one. What that says out loud is they don’t think Wales is important. And yet, incomprehensibly, those same organisations still expect people in Wales to trust them and engage with them. That’s not how relationships work.”

Reporters should be transparent about their reporting. Audiences should know exactly how and why journalists are reporting on a particular story. Gaps in reporting knowledge should be declared openly to avoid errors and suspicions among readers. “We are not experts,” Shirish said. “Lots of us are generalists. Sometimes we have to say ‘we don’t know’ rather than saying something that we don’t know.”

As journalists, we should never forget human beings are hardwired for stories. “Across cultures, stories are used as virtual reality simulators for life,” Shirish said. “Stories teach us how to navigate the world, prepare us for difficulties and ultimately tell us how to live more fulfilling lives. Isn’t this what journalism is about?” 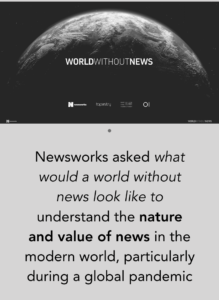 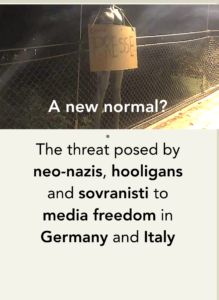 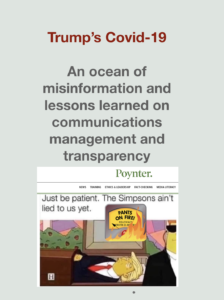